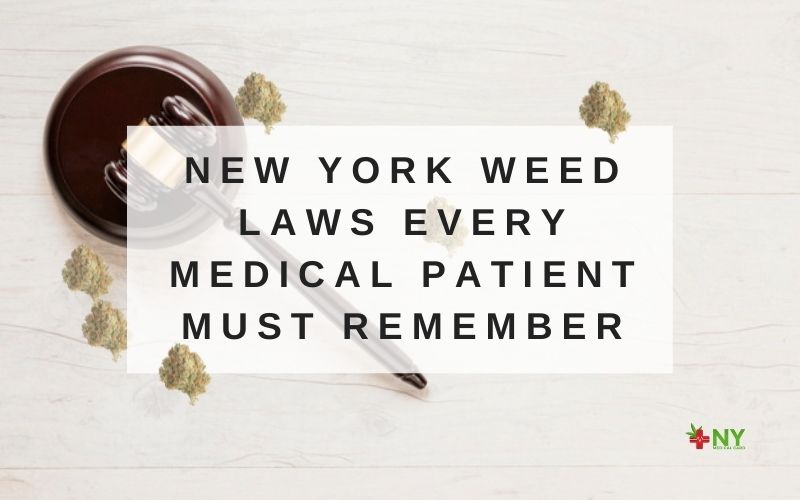 Ever since the medical community came face to face with the medical potential of cannabis, ‘medical marijuana’ became a hit and a preferred mode of treatment for a number of people. In the state of New York, it started with a very strict medical marijuana program to the approval of the MRTA act which now legalized cannabis (recreational and medical) in the state.

Now, most medical patients or ones seeking cannabis as a treatment option must have heard about the legal advantages of being a medical patient in a recreational state. From higher legal security to high possession limits, New York weed laws are lenient to those using medical marijuana. But, despite this advantage, there are a few laws that even medical patients cannot break. Let’s take a look.

If you are a medical marijuana patient, the first and most important thing that you should remember is to always carry your medical marijuana card. Even though the state of New York has legalized cannabis, it does leave some scope for legal problems if you are caught without a medical card.

For instance, medical marijuana patients can possess and purchase a higher limit than recreational consumers. If you are caught possessing more than 3 ounces of cannabis without a medical card, you can end up in legal trouble. Additionally, a medical marijuana card is necessary in the state as adult marijuana sales haven’t begun yet. So, you can buy cannabis in NY only if you have a legit card.

Once you consult a licensed health care provider and get a written recommendation, make sure to register with the New York Medical Marijuana Program to get your state issued medical marijuana card.

Being in possession of more than the legal limit can attract penalties even if you are a medical patient.

Though the possession limit is higher than the 3 ounces limit for recreational consumers, you must stick to your 60 day supply limit.

With the MRTA Act, the New York medical marijuana laws expanded and removed previously adapted restrictions such as smoking marijuana.

Now, medical patients can access smokable cannabis products and use it for their medical treatment without the fear of the law. However, the cannabis smoking laws are somewhat similar to tobacco smoking laws.

If you are a medical patient who smokes, make sure to do it in a private place. Any public place or area within 100 feet of a public or private school ground is prohibited. If caught, it will be taken as a violation of New York’s tobacco control laws.

Driving Under the Influence

Cannabis, whether medical or recreational, is a Controlled Substance under federal law. It is psychoactive and can cause mild to severe intoxication. This is why professionals advise you to follow safety tips when using cannabis. One of the safety tips include avoiding driving.

Since cannabis can cause a high, it is not the best state to be in doing an activity that involves complete alertness. Driving after consuming cannabis risks your safety as well as others. This is why driving under the influence of cannabis is prohibited and if caught will be considered as Driving While Ability Impaired by Drugs (DWAI) irrespective of whether or not you have a medical marijuana card.

Just to be safe, make sure that you consume medical marijuana at home and under the supervision of a person you can trust.

You cannot cross state boundaries while in possession of medical marijuana. While New York has legalized cannabis, the laws haven’t changed at the federal level yet. Going by the state law, cannabis is a Schedule 1 Drug and not approved to be a medical drug. The herb is also not approved by the US Food and Drug Administration.

As a result, if you are caught in the federal boundaries while in possession of cannabis, you may have to face legal complications. State boundaries and air space after an airplane takes off are all areas under the federal jurisdiction.

Using medical marijuana in New York as a registered patient offers a number of advantages. From money savings and high possession limits to legal security and easy home deliveries, you can access it all with a valid medical marijuana card.

However, certain New York weed laws must be followed to ensure that cannabis sale and use is regulated and the herb is not misused. Now that we have discussed the most important weed laws, it is important that all medical marijuana patients remember them when using cannabis to avoid legal troubles and have a safe experience every time.