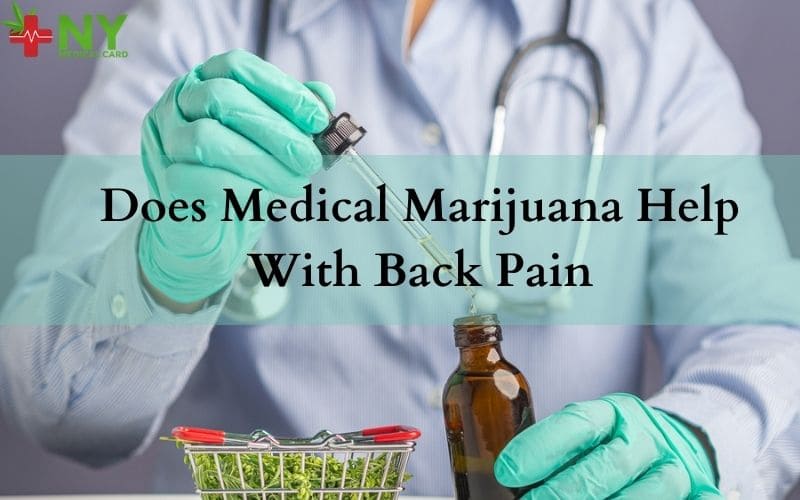 As per reliable reports, Low Back Pain (LBP) is the second most common cause of disability in US adults and around 149 million days are lost each year due to extreme cases of it. Back pain is without a doubt one of the foremost reasons for people to skip work and visit the doctors. This also makes it quite a costly health condition with total loss costs coming around
100 to 200 billion dollars annually, mainly due to decreased wages and reduced productivity.

Medical marijuana became the ultimate solution for this problem and many countries supported this intervention. The doctors played a major role in guiding such movements from Medical marijuana New York doctors to health professionals in other states, it was a joint effort which led to the popularization of naturally derived cannabinoid solutions for intense back pains. It became an alternative form of treatment for back pain as opposed to the allopathic treatment and provided a significantly cheaper option. The naturally occurring cannabinoids were non-addictive for the user and also gave few to no side effects at all. This led to a revolution of cannabis usage, where patients are now openly embracing the use of it and getting the benefits.

In regards to the pain relieving quality of MMJ in cases of back pain, let us closely read through every aspect that makes it a good option for people.

How Is Medical Marijuana an Effective Treatment for Back Pain?

As conventional medicines give the users many side effects ranging from nausea and upset stomach to ulcers and gastric bleeding, an obvious need to come up with a better alternative solution to treat back pain without experiencing side effects was realized. Medical marijuana due to its stunning pain relieving possibilities thus became the one option people turned to. But is it effective in treating back pain and if it is, how exactly? Yes, MMJ is the perfect solution for people for treating their back pains and mainly due to the following reasons.

What Are the Symptoms of Back Pain and How Does Medical Marijuana Help Treat Them?

Being a strong and effective treatment for chronic joint pain, cannabis or medical marijuana is an established way of relieving pain and helps with reducing many symptoms of lower back pain, let’s see how.

Many valid studies have promised that the consumption or application of medical marijuana can calm down muscle spasms. Pain and muscular spasms are the most obvious symptoms of back pain and have to be consoled well to help the patient in getting rid of their intense back pain episodes.

Medical marijuana also helps the patients in getting rid of the nausea and vomiting that the traditional medicines like opioids caused for the patient. It also induces sleep and reduces the chances of getting depression.

For instance, a person can consume medical marijuana in New York only when they are suffering from a specific issue from a list of health conditions. In this particular list, severe nausea is one of the health issues which warrants the use of medical marijuana. Any patient looking to get a medical marijuana card to treat their nausea in New York can simply find a legit MMJ doctor near them, hop on a call and get their card within a few minutes.

Marijuana has high anti-inflammatory properties and that is why it is used to treat many issues like arthritis, degenerate issues in the spine etc. Most of the neck pains and back pains are a direct result of degenerate changes in the spine and thus MMJ becomes the perfect solution.

Method of Consuming Medical Marijuana for Back Pain

Medical marijuana can be used in a number of ways depending on the product you’re using to get rid of your back pain.

This is probably the fastest method of consuming marijuana to treat your pains. You smoke or vape your pain away.

Here, the medicine can be incorporated in the diet of the patient. It will reduce the pain without giving any psychoactive effects.

Another fast method of consumption, tinctures are indeed effective in alleviating pains in the patients of back pain when a few drops are put under the tongue of the patient.

The pain relieving effect will take a few hours to be felt by the patient depending on the potency of the product and also the problem to be treated. This is advised for all chronic pain patients as they have to regularly consume marijuana.

Topical application is when the afflicted area of pain is rubbed with an MMJ gel or cream giving the user the soothing effects via the method of absorption. The desired effect will depend on the application and the duration of use.

Since there is no end to the back pain problems that keep cropping up due to the sedentary lifestyle that people are living, the quest for a permanent solution was very much needed. Especially in the recent years when the cases of severe back pains have skyrocketed, medical marijuana became a blessing in disguise. The shocking revelations of each individual getting affected by back pains at least once in their lifetime called for a new age of medicine where marijuana could be used openly for the treatment of certain problems and it got one. Let’s be a part of this change and promise to always go for natural solutions for our problems.