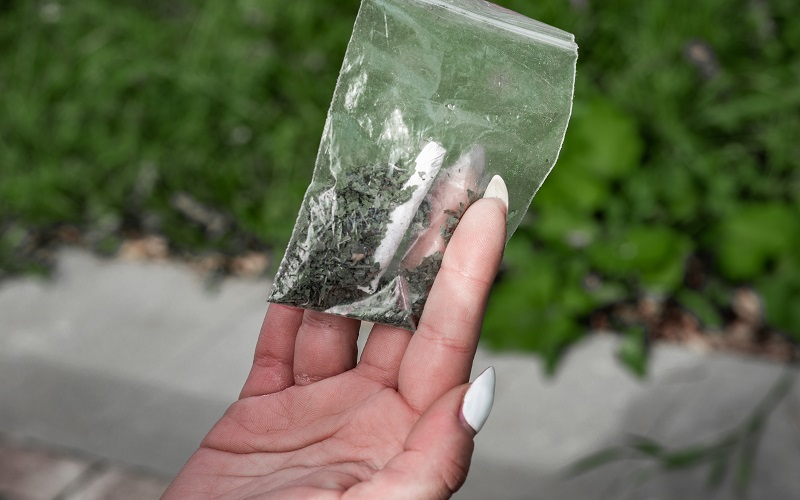 Synthetic marijuana has been, for the longest time, a dreaded ‘alternative’ of naturally occurring marijuana. Unlike other cannabinoids that are extracted from marijuana or hemp sources, these ones were once synthesized for the sole purpose of research.

However, the widespread distribution of these toxic alternatives across different channels and amongst the citizens of NY has necessitated the use of marijuana products you can access with a New York medical card.

While you can get these toxins from any shady vendors and drug dealers, medical cannabis can only be obtained from a licensed dispensary, making it legal and safe.

But before we get into why you should choose medical cannabis over synthetic, let us learn a little more about synthetic marijuana. Why it is feared, its side effects and why we should move to better, cleaner and naturally occurring alternatives.

What is synthetic marijuana?

As the name states, these cannabinoids have been synthesized in laboratories rather than being sourced out from natural hemp or marijuana sources.

These are often a combination of naturally grown plants that are sprayed with chemicals that imitate the effects of THC, but at a much greater potency. These chemicals lead to extreme psychosis in humans due to how potent they are.

Why were these synthesized? For research.

John W. Huffman was the scientist who first started synthesizing cannabinoids to learn about the endocannabinoid system in humans in 1984. He worked to create terahydrocannobidol (THC) like cannabinoids- in other words, components capable of creating a psychoactive effect.

However, the publication of all that he researched and concluded was made available to the public which has led to the present hijacking of basic research.

At present, these synthesized cannabinoids can very easily be found circulating the market, being smuggled around and sold to college graduates. This blind circulation makes the drug even more dangerous than it already was.

Synthetic cannabinoids are NOT meant for your consumption and should strictly be restricted to their academic purpose. Rather, you can always opt for a safely sourced marijuana strain that has been extracted for consumption.

A majority of states have legalized the use of cannabis to varying degrees, allowing citizens to consume high quality and safe products. New York, for one, has legalized both medical and recreational (quite recently) use of the herb. This legal availability of the herb should end the consumption of any synthetic cannabinoid.

But out of the two, which one should you opt for?

Medical marijuana is definitely the better option. If you qualify for the medical conditions stated by your state authorities, you can apply for a medical marijuana new york card, that’ll allow you to possess, consume, travel with (inside state borders) and grow your stash without any legal loopholes.

With a medical marijuana card, you get high quality, high potency products that won’t cause an unregulated high as synthesized marijuana does. These strong doses do not lead to similar levels of addiction nor are they responsible for all the side effects associated with synthetic cannabinoids.

Any cannabis product can lead to some level of nausea, insomnia or anxiety if not consumed in regulated doses, or when a high dose is administered at an early stage. However, you aren’t prone to bruising, bleeding, strokes, seizures, or brain damage with marijuana use.

Disclaimer: Some states like Oklahoma, don’t even have a set list of state approved medical conditions that qualify for the use of cannabis. In these situations, you can directly consult your physician to get a medical card.

To apply for a New York medical card, you must qualify for the following medical conditions:

Even if your condition doesn’t qualify for medical marijuana recommendations, you can still use cannabis recreationally. While this limits the consumption to less variety of products and lower potency, these are safer options as opposed to unregulated synthetic substitutes.

To ensure the the product you’re buying is of high quality, you should only buy cannabis products (CBD oils, edibles or flower with less than 0.3% THC) from licensed vendors. To verify if a retailer is legit, you can check the product specifications, read through the labels and ingredient list, and closely evaluate the certificate of analysis (COA). The absence of a COA should be the first red flag, and the only one you need.

Synthetic Marijuana is a highly intoxicating drug that leads to more negative effects than positive. With most of these cannabinoids being federally illegal, their consumption should be avoided at all costs. 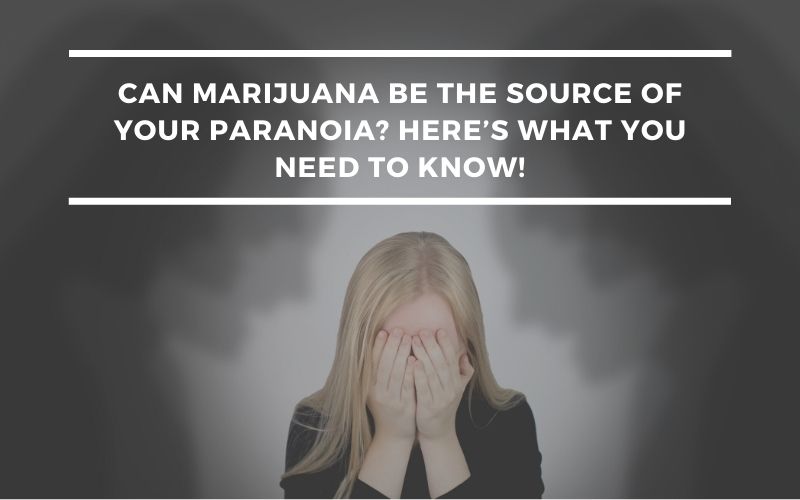 Marijuana has, for the longest time, been associated with mental disorders and paranoia, but in vastly varying degrees. While some studies have shown positive effects of marijuana on patients suffering from anxiety, depression, PTSD, and even conditions like schizophrenia and alziemers, there are a bunch of studies that advise against it.

But it all comes down to your source of marijuana, your concentration of THC, if you’re biologically receptive to the drug, what age you begin using marijuana, and the other medications you might be using.

This is why, when buying marijuana, you should always go for a medical consultation from a certified cannabis doctor, and only buy recommended products or doses with your New York state medical marijuana card. The NY marijuana laws have made it easy for all adults to get their hands on some high quality & potent marijuana products as long as their condition requires its use.

Now, let’s dig deeper into what part of marijuana can lead to paranoia in patients and medical marijuana users.

What is your Strain Made Of?

Cannabis or marijuana have a bunch of cannabinoids that work together to give you a relaxing, relieving, and euphoric experience. However, what your strain has more of, could decide how your trip goes.

CBD, one of the two most researched cannabinoids found in the herb is known to give a relaxing and relieving experience to users. Whether on a recreational level or a medical standpoint, high CBD potent products are usually recommended for patients of anxiety, depression, insomnia, chronic pain, epilepsy, AIDS, and multiple other conditions.

THC, on the other hand, is the most talked about cannabinoid, responsible for the psychoactive effects that you might refer to as intoxication or the ‘high’. While THC is also responsible for alleviating a lot of the symptoms that come with the conditions stated above, it is also known to create an atmosphere of psychosis.

High THC consumption over longer periods can make a person more prone to paranoia. Since THC consumption is also linked with hallucinations, one should be careful while consuming THC potent products.

As a patient suffering from anxiety, or any mental disorders that make you more susceptible to paranoid episodes, it is not recommended to get a strain with high THC concentrations.

Your cannabis doctor can recommend any broad spectrum or CBD isolates to help you calm your nerves and get the benefits of cannabis without the unwanted high and paranoia.

Are you naturally at a disadvantage?

If you’ve always been more of an overthinker, making anxiety your everyday pal, cannabis use(with high THC levels) isn’t the best option for you. In cases like these, you should depend on higher CBD dosage.

Research also shows a great compatibility between the psychosis caused due to cannabis use and people with a specific variant of SKT1 gene. The gene is responsible for governing an enzyme that controls the dopamine levels in the brain’s stratum. And do you know what condition is associated with fluctuations in dopamine levels? Schizophrenia.

When Did You Start Using Cannabis?

Adolescent use of cannabis has been closely related to mental health issues going into adulthood. It has shown decline in performance, and basic coordination and eventual long term use may lead to addictive behaviour. The use of the drug at an early age (which is illegal) would require teens to get it from an unreliable source. This could mean that the THC levels would be unregulated, leading to potential side effects.

Teens with a family history of psychosis are also at a high probability of showing similar symptoms after unregulated use of cannabis at an early age.

When combined with the previous point discussed, early use of the drug and a natural vulnerability to its effects can turn out to be the perfect recipe for a psychiatric condition.

Reasons like these can make the use of recreational marijuana dicey, especially with unreliable vendors. NY marijuana laws make it easier for you to not go down that path.

You can easily apply for a new york state medical marijuana card if you think your condition requires marijuana use. All you need to do is fill a form with all your details, sit through an online consultation, and if your condition is MMJ use approved, you can get your recommendation via email the same day. You only have to follow it up by registering with your state authorities.

Are You On Any Medication?

Cannabis interactions with other medications or even other substances like alcohol can be very dangerous for you. These can alter the way a medication is supposed to be broken down by the body, leading to alterations in effect. Some can even lead to extremely low heart rate to the point that you have to be carried to the emergency room. This isn’t hypothetical, it actually happened!

In other cases, this can lead to high blood pressure, elevation of THC effects like hallucinations and paranoia. It is always recommended to be completely honest with your cannabis doctor, when it comes to the medications or substances you might be indulging in.

You also have to take the physician’s guidance very seriously when it comes to mixing your medications with other substances.

The whole idea of whether cannabis can reduce your paranoia or increase it is relative. Relative to what kind of product you consume and if it has higher THC levels or CBD levels. It depends on what age you start consuming cannabis and whether you and your family are naturally receptive to the drug. As long as you’re crystal clear with your physician about your conditions, you’ll get a recommendation that creates the right balance for your symptoms.